Are y’all getting tired of seeing all this football stuff? I hope not! If you are, the season ends the day after Thanksgiving, at least this year. Who knows where we’ll be next year, but I sense a bowl game in our future. 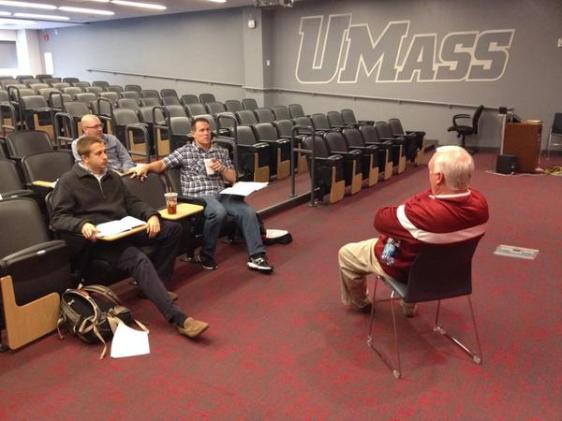 THe ESPNU crew talking with Coach Whipple ahead of our nationally televised game!!

I don’t know what’s more exciting about this, the fact that we’re going to be on ESPNU tomorrow night at 8:00 playing Ball State for the first time or the fact that one of our alumni, Rene Ingoglia, is going to be one of the commentators. This is only the third time that UMass has been on national television since Bill has been working for them, and the last two times were during the playoffs, so those don’t really count. Ok, they count, but this is the first time we’ve been on national television during the regular season at home in Amherst, so this feels bigger. A LOT BIGGER. I know I’m going to be pretty much useless tomorrow at work since all I’ll be able to think about is getting back to Amherst in time to partake of the pregame festivities. No, I won’t be drinking, I’m on muscle relaxers at the moment, but I plan to be there to film the walkthrough, take photographs and I am thinking I may just get my face painted. Don’t worry, I’m not going to go all out…maybe just a UM or Go UMass or something. I have to face the coaches wives after all. But hey, I’m a rabid UMass football fan. They wouldn’t be surprised to see me wearing my school pride on my face. At least I won’t be as crazy as the guys I’m sure will show up shirtless and covered in red paint to get on t.v. Thankfully the polar vortex won’t hit until Thursday, but by then I’ll be too happy with our win to care. Go UMass! Fire the musket!